Chief Flournoy was in fact the first African-American Chief of Police ever appointed in Burlington County and the state, and it is widely believed in the nation as well.

The Chief Payton I. Flournoy, Sr., Memorial Park will be officially dedicated at a ceremony on Saturday, September 7, 2019 at 11:00 AM.

Please join us as we HONOR one of Palmyra’s Native Sons!

Light refreshments will be served in the Community Center following the Dedication. Memorabilia will be on display for review as we share stories, memories, and connect with old friends.

Want your name etched in stone for all posterity? Visit
http://boroughofpalmyra.com/custom-engraved-chief-peyton-flournoy-park-brick-pavers-now-available

On the first anniversary of 9/11 the Bandshell (adjacent to the Park) was renamed The Firefighters’ Memorial Bandshell in honor of two brave Palmyra firefighters who lost their lives in the line of duty: Edwin W. Redfield, Jr., and Lawrence Betty. 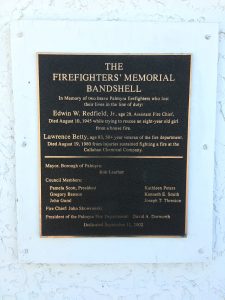 To learn more about Chief Flournoy please see the stirring essay below written by Will Valentino of the Palmyra Historical Society.

Breaking Through the Ice

Written by Will Valentino of the Palmyra Historical Society.

In the 1960’s, America was confronting issues of humanity, war and youth rebellion on a scale that had never been encountered before. A small town such as Palmyra, New Jersey is seldom looked to as a watershed of visionary ideals but the town shined brightly in 1959 when it appointed Payton I. Flournoy, Sr. as its new Chief of Police. Flournoy replaced Joseph H. Rodgers who was forced to step down due to health reasons.

Flournoy was a lifelong resident of Palmyra, New Jersey, graduating Palmyra High School in 1942 and excelling in Track and Football. While at Palmyra High School, where he was known as “Tee Wee,” he played on three championship football teams in 1939, 1940 and 1941 and helped win three state championships in Track from1940 through 1942 holding Burlington County record for both high and low hurdles and the high jump. According to Jet Magazine, Flournoy was also the first African-American to Captain the Football and Wrestling Teams at Palmyra High School. After High School, he joined the Marines for a three-year stint before attending N.Y.U. and joined the Palmyra Police force in 1950 becoming 1st Sergeant in 1955.

Flournoy’s appointment to Police Chief in 1959 transcended the failings of our society on the cusp of a decade that would become one of history’s most turbulent. This soft-spoken gentle giant of a man silently became Palmyra’s first African-American Police Chief at a time when such appointments were a rarity. In Palmyra, Flournoy’s appointment was seen as giving a proper nod to a man who made his mark on the police force and served the community faithfully. In reality, Flournoy’s appointment as Chief, four years before President Lyndon Johnson signed the Civil Rights Act was groundbreaking on so many levels. Flournoy had become the first African-American Police Chief ever appointed in Burlington County. In a time, forty years after the Civil Rights Act was signed, when communities across the country are celebrating similar appointments as recent as 2009, Payton Flournoy Sr. and Palmyra were a man and town years ahead of their time.

Shortly after his groundbreaking appointment, Flournoy was given national attention with a feature in “Ebony” magazine and Flournoy soon appeared in national advertisements in the magazine for ‘Viceroy” cigarettes. Looking beyond Burlington County, it is widely believed that Flournoy was the first African-American appointed to Chief of Police in the Nation, making the Palmyra appointment even more significant. Shortly after his appointment, Flournoy was feted at a surprise reception in February of 1959 attended by 150 police and civic leaders. At the time, Palmyra Mayor Harold F. Marshall commented The Borough’s choice of Flournoy had received widespread approval from many sources and that council appointed Flournoy based on his excellent record as a patrolman on the force. In reality, Palmyra raised the bar in overlooking any racial barriers at a time when reaching for that higher ground was very rare indeed.

Flournoy would serve as Palmyra’s Chief of Police for 14 years before retiring from the force in 1976. During his time as Chief, Flournoy is credited with supervising and modernizing the Department’s facilities. Upon his retirement, a humble Flournoy looked back at his career. “I’ve had some backing from some beautiful people I’ll always remember.” Flournoy continued to live and work in town, where he was known as “Chief,” until his death at age 68.

For more info & to learn how to get involved as a member, trustee, or financial contributor go to www.boroughofpalmyra.com on the internet and click on “communities” and scroll to “Historical Society.” You will also find some old postcards and historical photos on the www.riverlineneighbors.com website as well as many contributory articles. Your financial donations however large or small enable us to preserve your local history.