Borough offices are closed and there is no Borough Council Meeting scheduled for this evening.

Looking for an opportunity to VOLUNTEER on MLK Day of Service, Monday, January 20th?
Go to: http://boroughofpalmyra.com/mlk-day to learn more!

Making of The King Holiday

Signed into law in January 1983 by President Ronald Reagan, the national Martin Luther King, Jr. Holiday is a celebration of Dr. King’s immeasurable contribution to the United States, and to humankind. The holiday would not have been possible without the tireless leadership of the King Center’s founder and long-time president, Mrs. Coretta Scott King. We encourage you to read her inspiring words on the meaning of the King Holiday and learn about its history.

Celebrated on the third Monday of January, the King Holiday is a time when the nation pauses to remember Dr. King’s life and work, but also to honor his legacy by making the holiday a day of community service, “a day on, not a day off.”

At The King Center in Atlanta, King Day is the culmination of a week-long celebration marked by youth programs, educational seminars, community dialogues, service projects and our annual Salute to Greatness Awards and Dinner and Commemorative Service. 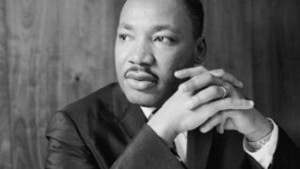