CHIEF ROBERT FOW’S VISITATION IS SCHEDULED FOR FRIDAY, JULY 22ND FROM 2:00 TO 6:00 PM AT THE PALMYRA FIRE HOUSE. THE VISITATION IS OPEN TO EVERYONE WISHING TO PAY THEIR RESPECTS.

Former Chief Robert A. Fow sadly passed away on Saturday, January 8th. Bob was first hired as a Patrolman in 1972 and promoted to Sergeant in 1976. In 1978 he was promoted to Chief of Police and served in that position for 20 years, retiring in 1998. He was very active in the community having lived at the corner of Garfield and Wallace Aves for many years where he raised his family. Bob also held karate classes at the Charles St School. He was a friend and mentor to many and was highly respected in the County and State Chiefs Associations, as well as by all those that worked and served with him here in Palmyra.

Bob was a life member of the Burlington County Chiefs and N.J. Chiefs of Police Association. He was a graduate of the NJ State Police Basic Municipal Class, a member of the Police Officer Narcotic Association, and attended the FBI National Academy.

Bob Fow was an iconic and well liked member of our community and was pre-deceased by his wife Carol and daughter Cindi, and is survived by his son Bob, his wife Kari, and their daughter Patricia. Bob will certainly be missed by many. 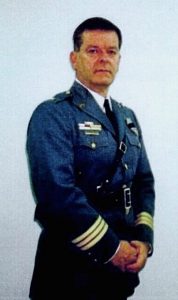